On sale now! "More Than Nothing" by 49th Vibration

F*!k Covid! We are playing a show!

Sun July 18th at II Brothers in Plano, TX is when it all goes down. There will be lots of bands, food, drinks, etc., and all for a good cause.

We are putting the finishing touches on the upcoming LP.

Next is mix and master and distribute. Can't wait!

I (Troy) have been using a M-Audio Delta 44 PCI audio interface for quite a few years now. At the time, I had tried a few USB versions and they always had terible latency, so I went internal with PCI card.

It really worked well for me for home recording. I usually created songs with drum samples, guitars, bass, vocals, and averged about 12-16 tracks. My computer wasn't the best, so once I got past 12 tracks with any amount of real-time effects, I started having hickups. I bought a little better computer along the way, and that helped, but it still got a bit quirky around 16 tracks.

I have been dealing with this for a while. I added a bit of RAM, but I was fine for the most part if I kept it under 16 tracks.

Lately I been struggling with lots of tracks and lots of effects, so besides getting a new computer, I felt I could also upgrade my interface. I recently tried a USB PreSonus AudioBox and so far it's working great, and no problems yet (fingers crossed).

Progress on the album is slow and steady

Working around all of life’s obstacles can really break into your creative time, but that is life. The Progress continues on the album, and it is challenging, but a lot of fun. April's drums have all been laid down for all 8 songs, and now we are working on guitar, bass, vocals, etc. We are about half way through the basic recording, but mixing and mastering will follow, so I wouldn’t say we are half way through.

I (Troy) have been experimenting with different guitars, amp setting, etc. in my home studio, and I am really liking the results. The process has been this, I record guitars and vocals and then send a mix to Robbie. He records bass at his house and sends the bass tracks back to me to insert into the project. Then, April comes over to add backing vocals. It’s an interesting, fun, and challenging process.

I don’t have a large collection of guitars, but so far I have used pretty much every guitar I own: Strat, Tele, Casino, Shecter, Taylor, Takamine 12-string, and even my Fender Mandolin.

Work has begun on a 49th Vibration full length LP.

The original plan was to make an E.P. to have an example of our work for promotional purposes, and just to do it, so we decided to go into the studio and get some drum tracks down, and then take our own sweet time adding guitars, bass, vocals, etc. at our home studios. Well, we got so excited about it that the plan went from a 3 song EP to a full 8 song LP.

April knocked out eight songs in the studio and now it's on me and Robbie to fill in the rest. We have just started the process, but the first tune is sounded pretty damn good, so we are very psyched about the whole thing.

Robbie and Troy (sans Ape) spent Sunday afternoon doing some remote recording. They set up mics and cameras in a parking lot of an abandon convenience store in Plano, TX and just kicked back and played a few tunes.

There were plenty of honks and stares and a few thumbs ups. They even had a couple stop and interrupt one of the songs to ask some stupid ass question, or borrow something. We don't even know what they wanted, but they were oblivious to the song, mics, camera, mixing board, etc. and thought it was a good time to have a conversation.

We're not sure how it all came out just yet. We really just wanted to jam and get outside and of course document along the way.

Another productive 49th Vibration rehearsal. We just about have the new song, "Waiting", arranged and ready to add to the list. Very excited about it.

We played through some old songs and worked on a new one. We sounded pretty good for not getting together in over a month. We hope to nail down a few new tunes that we are working on and then book some shows. Stay tuned.

We had a great time at J. Gilligan's in Arlington last Saturday night (10-22-11). The show went great and it was a pretty cool club to play in. The only downer was that the Rangers got beat up by the St. Louis Cardinals in game 3 of the World Series.

Thanks to April and Robbie for setting all the equipment up while I was playing in Dallas with the 1969s. It was quite the undertaking, as April brought her own P.A. I'm sure she was exhausted by the end of the night. Thanks to everyone who came and to watch us play and support the cause.

The show went great and it was a pretty cool club to play in. The only downer was that the Rangers got beat up by the St. Louis Cardinals in game 3 of the World Series.

Thanks to April and Robbie for setting all the equipment up while I was playing in Dallas with the 1969s. It was quite the undertaking, as April brought and set up here own P.A.

We had a bunch of fun and saw I lot of friends, and met a few new ones.

All the bands were really good and a lot of money was raised at the door and through merchandise sells, auctions, etc.

We are about to have a few rehearsals to prepare for the upcoming benefit show on 10-22-11 at J. Gilligans in Arlington, TX.

Dave could not make the upcoming benefit shows, so we asked our friend and fellow musician Robbie Wilson to take on bass duties. We have rehearsed a couple of times and it's sounding "very" good. 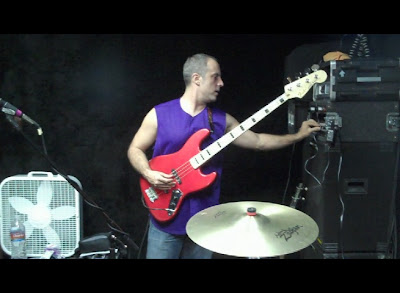 We our second rehearsal with the full band. It went well. It was cut a little short, but still went through most of the tunes and they sounded good.